Once again we hosted an open house on a week day. The blacksmith and I were so happy that so many showed up. There wasn't an accurate count but we guesstimated there were 40+ smiths and 8 wives. 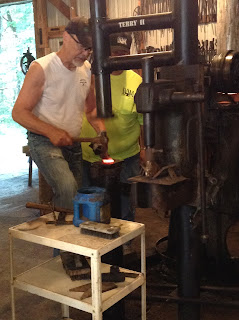 Bernie showing how the treadle hammer that he made works. 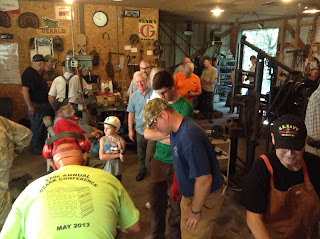 The shop quickly filled up. 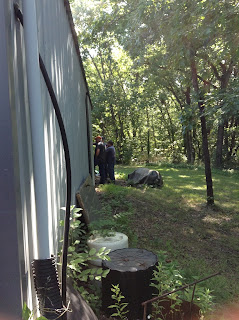 Some of the overflow hung out at the back door. 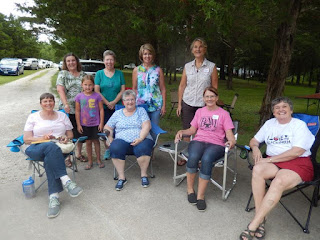 The women enjoyed a morning visiting before lunch was put on the table. 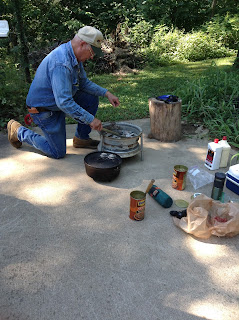 Mike made his famous Cowboy Beans. He cooked them using his rim-a-que cooker. Here's his directions: It's a 16" (or bigger) rim, turned upside down and with 3 legs welded on. Angle iron or light pipe both work for the legs. Then cut a piece 1/8 inch thick stock to cover the hole in the middle. A solid rim works best, there will be enough air coming in the the lug nuts. When using charcoal, put 8 briquettes on the bottom of the dutch oven and about 16 on the top. 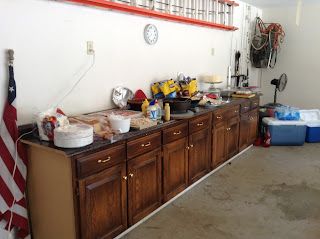 We again had quite a feast, ham, turkey, (about 5 pounds of sliced cheese that stayed hidden in the refrigerator), 2 pasta salads, many varieties of  chips, slaw, platters of devil eggs, sliced tomatoes, carrot cake, fresh peach crunch, angel food cake, zucchini chocolate cake, brownies, and probably something else that I have forgotten. Thank you to all who help contribute to the meal! 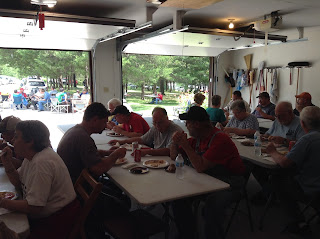 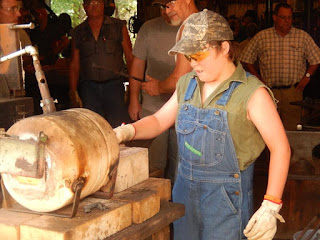 We had all ages involved.  Kaiden is just 12 years old. He's been forging for a while now. 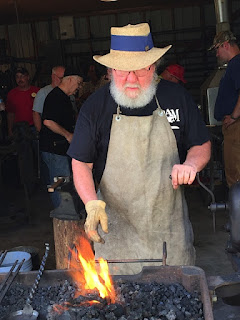 Scott has been a BAM member for years and always enjoys forging when he come, since he doesn't have the equipment at home. 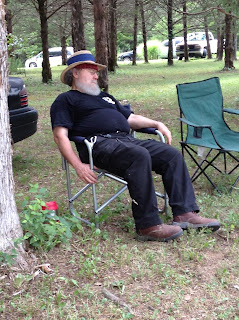 Of course it wore him out . . . so he took a little nap and I was luckily enough to capture it. 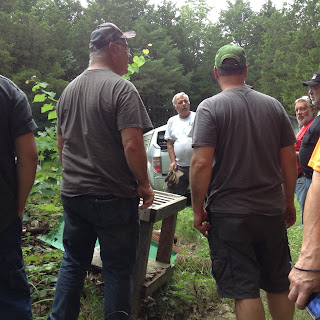 The guys always tend to gather about someone else's scrap pile! 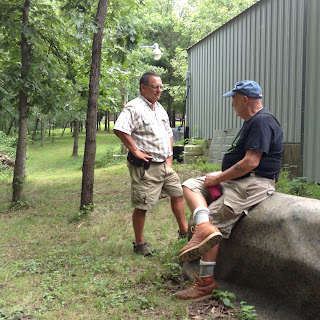 They was lots of visiting going on all day. 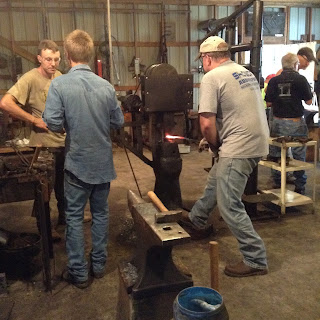 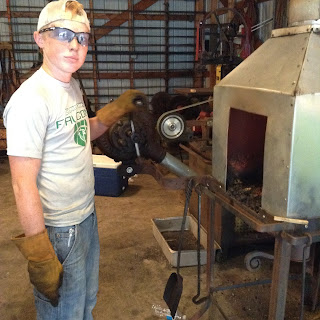 Luke happens to live about 2 miles from our house. His parents dropped him off for the day so he could join in the activities. 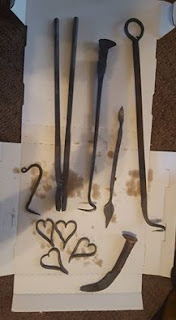 When Luke's Dad picked him up he wouldn't show him what he had rolled up in a bag. This was his presentation when he got home. Not bad at all for his first time forging. 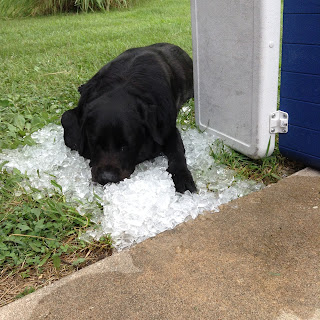 Bentley was worn out and hot. He enjoyed all the petting he was given. 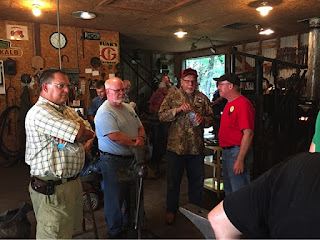 The day was filled with lots of exchanging of ideas.

Now that we've done this for the second year, it will pretty much be an annual thing, or so we hope.

Posted by Osage Bluff Quilter at 8:40 AM

Labels: The old retired guys and anyone who wants to take a vacation day

This is a great inspiring article. I am pretty much pleased with your good work. You put really very helpful information. Keep it up. Keep blogging. Looking to reading your next post. 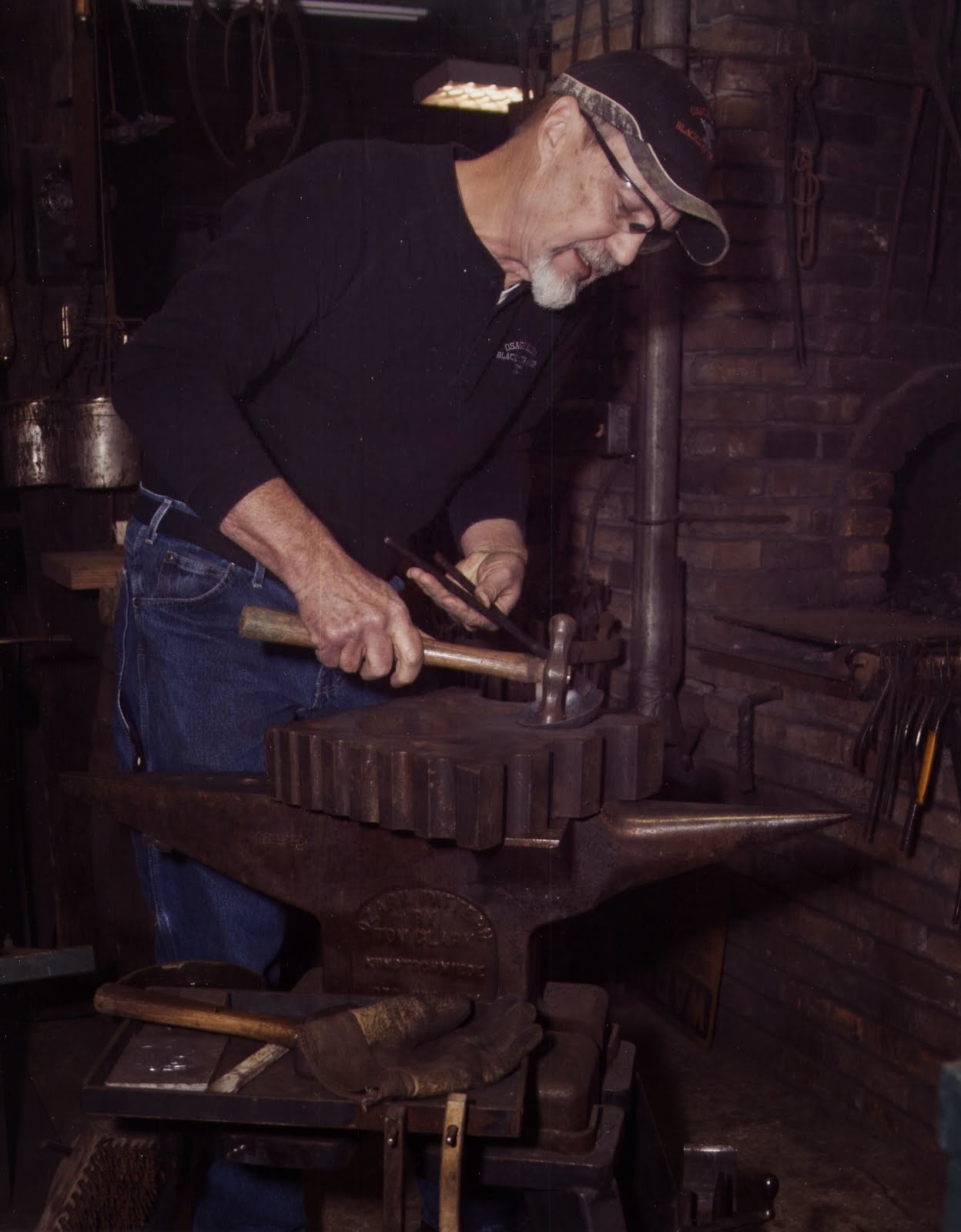 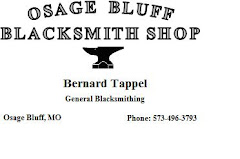